Benoit Baril is still followed by the Trauma team 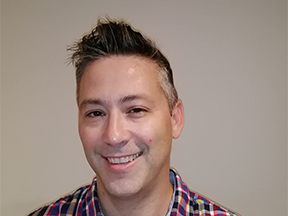 Benoit Baril almost lost his life on a bus bench, at the age of 21, following an act of gratuitous violence that still has great consequences on his daily life. Here is his touching story.

“In November 2000, my life changed. I was coming back from an evening with friends. After the end of the night, I decided to take the bus back to my girlfriend’s house. I was attacked. I was hit in the back with a machete, which pierced my entire body. My liver was cut in half, a quarter of my lung was cut off, my gallbladder, diaphragm and stomach were all hit and many ribs were broken.

As soon as it happened, I was immediately transported to Sacré-Coeur Hospital where the doctors immediately arrived to take me to the trauma room. All the care I received at Sacré-Coeur saved my life. Nonetheless, I had three cardiac arrests there. I also did a lot of physical therapy with the team. I trained hard because I had lost all my muscle mass. You need a good team to coach you well if you want it to work.”

These words were collected during an interview conducted in 2008. Benoit Baril mentioned that he was 100% functional. He had started downhill skiing again and was the happy father of a 2-year-old boy, Mikaël. He was able to work and get on with his life.

“My wife Isabelle and I waited 7 years before having another child, Alexis. We wanted to see how my condition would progress. I have been followed all these years by Dr. Ronald Gordon Zelt and Dr. Ronald Denis. I have had other operations since then, about 20. I don’t count them anymore. I studied computer science and worked in the field. However, due to my health problems I had to leave my job. I have limitations that I must take into account. But I am happy to be alive, to be able to walk and to see my two children grow up healthy,” added Benoit Baril recently.

For Benoit Baril, the opening of the Integrated Trauma Centre, where he will be doing research and teaching, gives him hope that his quality of life and that of others who experienced severe trauma will improve. Thanks to research, surgical techniques from the United States and trials, Benoit Baril is still able to enjoy the beautiful moments of life.