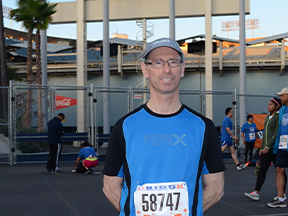 Does Saint-Vital-de-Clermont ring a bell? If you live in the greater Montreal area, probably not. However, the residents of this small village in Abitibi-Ouest have one thing in common with you. If they need treatment for a severe concussion, trauma from a serious car accident or a complex heart problem, they are referred to the Montréal Sacré-Cœur Hospital just like you.

"In my part of the province, we know how important the Sacré-Cœur Hospital is. It’s not uncommon for someone to be transferred there for a serious health problem," said Mr. Michel Jérôme, who has been a monthly donor for almost 15 years and the ambassador of our Foundation's new monthly giving program, the Circle of Big Hearts.

Michel Jérôme began making monthly donations in recognition of the care his father received at Sacré-Cœur for an aortic aneurysm in 2005. His father was well cared for and passed away 12 years later at the venerable age of 96. Mr. Jérôme is very grateful for what the Sacré-Cœur cardiology team did for his father.

Little did Michel Jérôme know that in 2013 a severe concussion suffered while playing sports would land him in an air ambulance on the way to Sacré-Cœur. His wife, Hélène Mercier, remembers making the eight-hour drive from Abitibi to Montreal to meet him very well since only the patient rides in the air ambulance.

Mr. Jérôme was hospitalized for a week to treat his fractured skull and the three hematomas on his brain. "When he was asked the standard question, do you know where you are, he said he was in a heart," said Mercier, who vividly remembers that time at Sacré-Cœur and those anxious moments.

Mr. Jérôme's return was also done by air ambulance and his health was monitored in a hospital in Rouyn-Noranda, an hour's drive from the couple's home. The Sacré-Cœur team was in contact with the team at the hospital as soon as he arrived home. Mrs. Mercier, a former nurse, took care of him every day. She says she still has fond memories of the accommodation she found in one of the Sisters of Providence residences located near the hospital and especially of the comfort provided by the care teams.

With all this excellent care, it took a good year for Mr. Jérôme to get back on his feet and even more for his mood to improve. The athlete started training again and, in 2015, he completed no less than 5 marathons, a record for him who used to participate in this type of event every year.