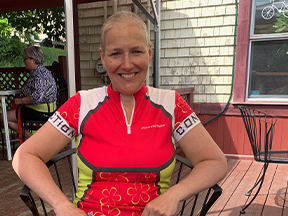 Isabelle Rhéaume will not forget 2019. A very strong bond was created that year with the members of the Hematology-Oncology Department team at the Montréal Sacré-Cœur Hospital. So much so that she decided to participate in the Vélo-Onco fundraising event and set up a fundraiser for the first time in 2021 and, by her own admission, it will certainly not be the last. Here’s her motivation.

It was after a routine mammogram that Isabelle Rhéaume, who had been symptom-free until then, was diagnosed with cancer in June 2019. Her doctor immediately referred her to the breast clinic at the Montréal Sacré-Cœur Hospital, mentioning that it had a good team and experienced doctors. Ms. Rhéaume was taken care of by the Hematology-Oncology Department.

While waiting for a surgery scheduled for August 5, Ms. Rhéaume got some bad news: her sister who had been living in Peru for the last few years had passed away unexpectedly on July 28, 2019. "It was quite an event a week before my surgery. I had to announce it to my mother who was already quite fragile since I started my cancer treatment," she confided. She therefore took advantage of the time she had before her surgery to prepare the funeral and welcome her family members.

After her surgery, which went well, Ms. Rhéaume had only one thing on her mind: prepare for her cycling trip to Croatia she had planned for the end of September, well before all these events. "I’m a cyclist and have been cycling for many years. For me, doing an 80 km bike ride is not a feat in itself. It is something that has been part of my life for about 10 years. I've been doing bike trips for seven years now.

A trip that became a source of motivation

The surgeon who operated on her wasn't too keen on the idea that she would have to delay the start of chemotherapy for two weeks to make the trip, when her priority should have been fighting the cancer. However, for Ms. Rhéaume, going on this trip was a great source of motivation to optimistically take on the treatments that would follow. It was after talking to her nurse, Solange Roussel, who also cycles, that she decided to go.  "I was in the recovery room and I was raising my arm. I told myself that my goal is to have my arm fully mobile in six weeks. Because on a bike trip, you're riding 80 to 100 km a day. I didn't want to jeopardize this trip. I quickly got back on my feet.”

Despite another setback, that of a breakup with her spouse at the time, Ms. Rhéaume managed to gain enough strength to make the trip. She then went through four months of chemotherapy. "I was very ready. I think I'm pretty resilient. When they told me you have cancer, I said fine. What are the next steps? It was something that was out of my control. There was nothing I could do or could have done.”

Ms. Rhéaume, who is very active by nature, took advantage of the fall of 2019 to do some activities between treatments such as puzzles, paint-by-numbers, catching up on TV series and of course some exercise. Her children were a great help in getting her through this more difficult time. Ms. Rhéaume was even able to organize a week of downhill skiing with friends in mid-February before starting her radiation treatment at the end of the month.

For Isabelle Rhéaume, the effects of radiation therapy were not immediately apparent, but the fatigue was still very present after several weeks. It became difficult to go grocery shopping and carry out certain daily tasks. It took two and a half months for her to regain some energy. In the spring of 2020, she slowly started riding her bike again. "While I was going through all that, COVID came along. It turned the whole world upside down, but it didn't change my life; I was already used to ordering my groceries and having my medicine delivered. I was already isolated at home."

Her first participation, but not the last

Ms. Rhéaume regained 100% of her physical fitness a year later, just in time to participate in Vélo-Onco, a fundraising activity that Solange Roussel had told her about. This year, each person took on their own challenge. Hers was to ride 1,000 km over a period of one month. In addition, she decided to hold her own fundraiser, which raised $2,550. She promised to shave her head for the cause if she raised more than $2,500. She succeeded in her bet during the last weekend of the Vélo-Onco. Also, during those two days, Isabelle Rhéaume rode 186 km (which she still had left to do) with her son Antoine and her daughter Camille. She wanted to finish this event with her family.

For her, the issue wasn't so much the distance to be covered in the month-long challenge. As the cyclist herself says, it was finding the time, between work and her other activities, to complete the number of kilometers that was more difficult. "It had to be a real challenge. I've done a lot of fundraising bike events, but if there's one that's close to my heart, it's Vélo-Onco. I was treated at the Hematology-Oncology Department and will continue to be treated there for another 5 years. I thought to myself, I couldn't be a better ambassador for a cause than by being a patient myself. I received such good care, I felt supported. This was the event I raised the most money for, without using corporate donations. People I worked with 15 years ago saw this on Facebook and donated.

"I'm really looking forward to experiencing the event in person," said Ms. Rhéaume, who promises to attend again. "If the money raised can provide some comfort to people with cancer during their treatment, I will be very happy," concluded Ms. Rhéaume following her 1,019 km ride.