Diane Dumais: Coming back from afar 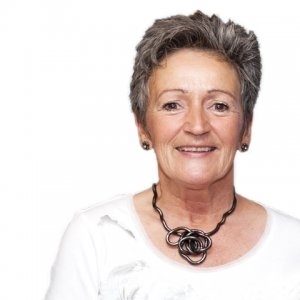 On August 4, 2002, Diane Dumais and her spouse left Laval on bike with Quebec City as their final destination. They never made it. In a hill in Mont-Orford National Park, Ms. Dumais suddenly braked hard, her bike went arse-over-kettle, and the two saddlebags full of camping gear struck her in the back of the head. The blow was severe, and Ms. Dumais went immediately into a coma. She left the park in an ambulance for the hospital in Magog. According to the diagnosis, Ms. Dumais had suffered violent cranial trauma.

Because of the gravity of her injuries, Ms. Dumais was transferred to hospital CHUS Fleurimont in Sherbrooke, where she underwent brain surgery. Her accident had caused hemorrhaging of the hypothalamus. After the intervention, Ms. Dumais’s return to consciousness was brutal. The right side of her body was paralyzed, a medical condition difficult to accept for a woman formerly so active and sociable. “Before my accident, I thrived on challenges. I worked as a waitress 45 hours a week, I ran, took three aerobics classes a week, and logged in between 4,000 to 5,000 kilometres of biking every summer. Being immobile was impossibly difficult for me,” the 57-year old explained.

Because of the partnership of CHUS Fleurimont and Sacré-Cœur Hospital in Montréal, Ms. Dumais was transferred quickly to the Montréal establishment, which is renowned for its medical expertise in traumatology and treats from 3,000 to 3,500 polytrauma cases every year.

When she arrived at Sacré-Cœur, Ms. Dumais was no longer comatose but still in bad shape. The greatest challenge of her life awaited her at the traumatology unit where she would have to learn everything again: to eat, to speak, to walk, basically, to live. Despite the enormity of the task, Ms. Dumais was up for the challenge and could rely on the professionalism, empathy, and moral support of teams of physiotherapists, occupational therapists, and speech therapists. Indeed, Ms. Dumais has only kind words for the doctors and professional caregivers she dealt with at Sacré-Coeur Hospital. However, one employee in particular stood out. “I will always remember Diane, a dedicated beneficiary attendant. Her cheerfulness and kindness made my stay at the hospital so much easier,” a grateful Ms. Dumais confided.

Ms. Dumais’s recovery would not have been possible without the unwavering support of her spouse, Claude, who, during her 30-day stay at Sacré-Cœur, came by twice daily, despite the fact that he worked full-time as a bus driver, to help feed her as she refused to eat in his absence. He firmly believed his wife would one day return to a semi-normal life.

After some 30 days at Sacré-Cœur, Ms. Dumais was transferred to the Jewish Rehabilitation Hospital in Laval to receive a further 8 months of treatment. It is, in fact, at this hospital that Ms. Dumais was reacquainted with a past passion. “A specialized educator signed me up for a painting workshop, a hobby I had given up some 25 years ago. The time I spent painting helped me greatly: it helped me relax.”

Ms. Dumais and her spouse have lived in Bois-des-Filion these past four years, and their house looks over the rivière des Mille-Îles, a true inspiration for the landscapes she draws. Ms. Dumais loves the region and has many friends. She is also involved socially, most notably with the Association québécoise des traumatisés crâniens (association of the victims of cranial trauma) offering moral support to association members. She also teaches aerobic dancing to the same clientele. Nothing stands in the way of this woman who has returned from afar. “I’ve always wanted to lead a beautiful life and I fully appreciate my new life.” We believe you Ms. Dumais!